You are at:Home»The Arts»Irish Art – Portrait of a Celtic Maestro

Irish Art is known all over the world… but have you heard of Jim Fitzpatrick? Maybe not but you definitely know his work. Jim  may not be a household name but mention his most famous work and he is instantly recognisable.  And, the artist responsible for the Che Guevara poster has many more strings to his bow.

When I phone Jim, he is preoccupied with the news of the day – and it has nothing to do with Covid. He’s angry that records from the Mother and Baby Homes Investigation are to be sealed for thirty years. “A huge injustice is being done,” he says.

As a boy, Jim would see Magdalene Laundry girls at the Corpus Christi procession near his home. He would try to catch their eye because he wanted to make them laugh. This empathy for the oppressed has stayed with him throughout his life; he has enormous time for people and has been involved with political struggles all over the world.

Jim created ‘Viva Che!’ – his earliest work and the one he is best known for – to promote freedom against oppression after the Cuban revolutionary was executed in Bolivia. He sent the poster to every revolutionary group he could find; it became an iconic image, serving as a symbol of protest all over the world.

Below: The original 1968 Che Guevara poster Viva Che! by Jim Fitzpatrick. This is Irish art but nobody knows it! 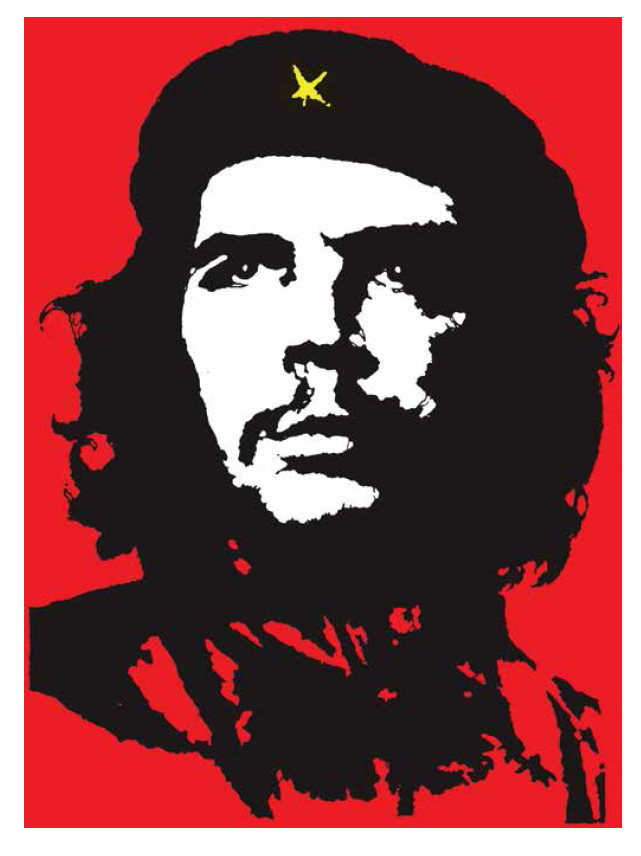 The huge storm surrounding The Che, as Jim calls it, was exactly what he wanted, although he was surprised by the extent of it. The original poster disappeared on tour in Eastern Europe and Jim’s distributor was arrested in Spain by Franco’s secret police. Even here in Ireland, the poster drew hostility and shops that displayed it were threatened.

Jim’s portrayal of Guevara wasn’t simply intended to stir up controversy, however. It was a personal expression from a man who idolised Guevara and had actually met him before his death. In a very Irish story, Jim was working in a bar in Co Clare in 1962 when Che Guevara – whose flight had stopped over at Shannon – just happened to walk in. “Guevara looked like a movie star, he was an extraordinarily good-looking man,” says Jim, “and a total gentleman.” Was the Cuban revolutionary surprised to be recognised in a bar in Kilkee? “Guevara was absolutely surprised but he knew everything about the War of Independence and about Ireland. He told me he was a Lynch from Co Galway.”

‘Viva Che!’ was based on a photograph by Cuban photographer, Alberto Korda. Because of this, and because he wanted it to spread quickly, Jim made the poster copyright free. That was a decision he has since reversed because of its exploitation by corporations profiting from its use. However, the artist still promotes its free distribution for private use. In fact, Jim has made much of his work available for non-commercial purposes. But does that prevent him from making a living? “No, it comes back to you. People are free to download my work from my website and hang it on their walls. I love all that. There is a notice on my site that forbids commercial use – that kills the piracy end of it.”

Below: RECLAIM THE REVOLUTION! (2015) by Jim Fitzpatrick. Part of a collection of free posters. 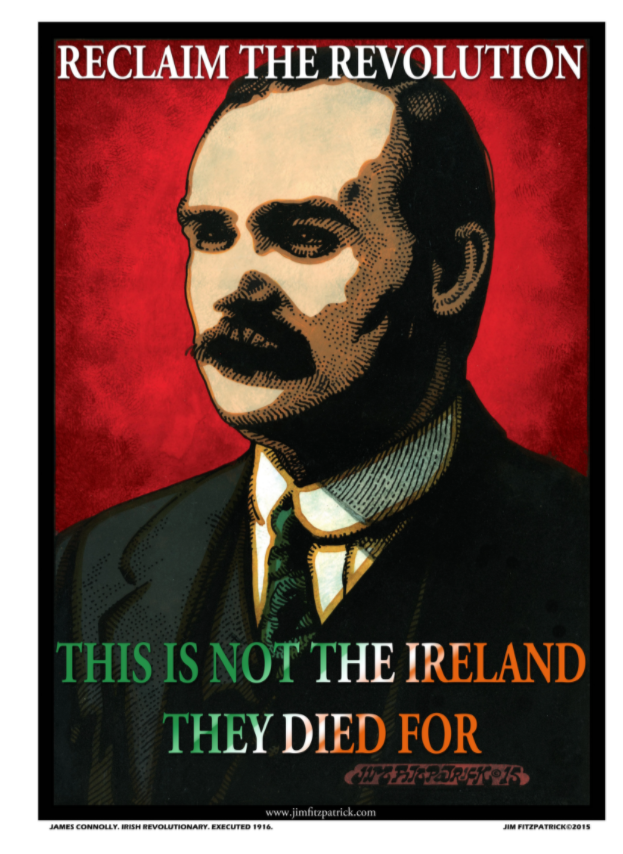 ‘Viva Che!’ has brought Jim to the attention of groups fighting oppression across the world. He has worked with several organisations in Syria, including the Kurdistan Worker’s Party (PKK) whose leader, Abdullah Öcalan, has been imprisoned in Turkey since 1999. Jim created a poster of Öcalan, for whom he has great admiration. He highly recommends Öcalan’s book on feminism, which leads into a discussion about equality between the sexes. “I always felt things should be automatically weighted towards women,” Jim says, “because men have more advantages.” He points to the women who fought for Irish independence and notes that Padraig Pearse himself said they were better than the men. Yet unlike the men, they were denied a pension for their service. Jim noticed early on that investing in women was a smart move. “Women will work harder to prove themselves,” he says.

While working as an art director at an advertising agency in the 1960s, he brought four female employees into his creative team. “It was like having a secret weapon,” he says, describing how hard the women worked. So, does he feel female equality has come far enough? “When men can get pregnant, then we’ll have equality,” he says with a laugh. But he notes that at least things get talked about in modern Ireland. “We talk about bloody everything now, it’s about time.”

In one of his more recent forays into controversy, Jim turned his attention to the Palestinian teenager who was jailed for pushing and kicking an Israeli soldier outside her home in 2017. In a pointed reference to the Israeli actress who played the role of Wonder Woman, he created a poster that depicts Ahed Tamimi as the real Wonder Woman.

Jim hasn’t forgotten our own revolutionary heroes in his work. His Irish Revolutionary posters are freely available on his website because he wants these great Irish figures to be remembered. However, despite the international recognition he has received for his revolutionary art, there is much more to this artist.

Below: Boann Bru Na Boinne (1993) by Jim Fitzpatrick. Boann was river-goddess of the Boyne and a warrior princess of the Tuatha Dé Danann.

He is the man responsible for much of Thin Lizzy’s artwork and was close friends with Lizzy frontman, Phil Lynott. Both men were big comic fans, and these influences can be seen in some of the album covers, like Jailbreak and Nightlife. But it is Celtic art that makes up the bulk of Jim’s vast body of work. “I’m a fanatic for it, I love it,” he says of Celtic mythology. And he certainly knows his stuff. He has painted many incredibly detailed pieces depicting scenes from Irish mythology. “It takes up so much time though, it’s very labour intensive. I only do one or two a year now.”

So where does he get the inspiration? “I read endless stuff about it, and can’t travel at the moment, but I love going to see standing stones and things like that. I was involved in filming at Newgrange for an American documentary. They let me wander round when nobody else was there. We used a big searchlight to light it up, so I got to see how the sunlight hits it at the winter solstice.” 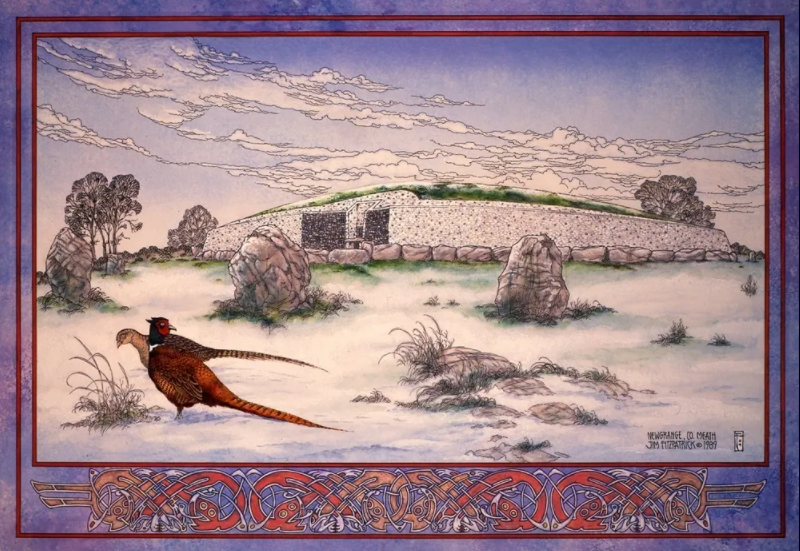 So, what next for Jim? “There’s nothing I enjoy more than being left alone to do my work,” he says, explaining that he hopes to have more time to devote himself to his art. “I love the Celtic work, there’s a lot more I want to do. There’s a sinister side to the Celtic tradition, I’d like to do a bit of that.” We can’t wait to see it.

Previous ArticleSeawater Farming – A Gamechanger for Ireland
Next Article Pets and their Smarts: They Might Even be Brighter Than US