You are at:Home»Things to do and See»So you Know that St Valentine’s Bones are in Dublin, Right?
Share

In Dublin there is a Shrine to St. Valentine that actually CONTAINS St Valentine. You should TOTALLY worship there.

The Carmelites first arrived in Ireland in 1271. Their church, The Whitefriar Street Carmelite Church in Dublin, is famous all over the world. And here’s why you need to know this now: St Valentine’s earthly remains are in the church. Yes HIS DEAD BODY. Ew!

So who was St Valentine?

We all know the day of the year where we give our lovers cards, heart-shaped cushions and other useless tokens. But this special day actually celebrates the life of a man who walked this world in about the third century. The only proven fact about him is that he died on February 14, just north of Rome.

Valentine was both a doctor and a priest. At the time, Emperor Claudius was building his army, and forbid young men of warring age to marry. He did not want them exhausted or distracted from their main job of empire building. Valentine refused to adhere to this new and ridiculous law, and married young couples secretly in his capacity as a priest.

When Claudius and his men discovered that Valentine was marrying young people, Valentine was thrown in prison. But Valentine knew what he was doing. He befriended his jailer, who had a blind daughter, named Julia. Legend has it that because he was a learned man, he was asked to help Julia with her studies, and she came to visit him in jail.

Claudius was so impressed with Valentine’s progress with Julia, he offered to set Valentine free if he would denounce his faith to God and pray to the Roman Gods instead. Valentine refused, and indeed tried to convert Claudius, asking him to put his trust in Jesus. Claudius was enraged, and sent Valentine to his death. On the morning before he was executed, he wrote Julia a letter, signing it “From Your Valentine.” And hence the tradition started.

Valentine’s death wasn’t a quick and easy one. He was beaten, stoned, and beheaded on February 14, 270. People who remembered his loving service to many young couples began celebrating his life. By 496, Pope Gelasius designated February 14th as Valentine’s official feast day.

Why Are St Valentine’s Remains In Dublin?

There is some dispute as to whether all or even some of St Valentine’s body lies in the church in Dublin. So how on earth, I hear you ponder, did Dublin get such important remains in its midst?

Apparently, a very charismatic Carmelite based in Dublin called Fr John Spratt took himself off to Rome to meet the Pope. That he was able to achieve this is testament to his powers and reputation as a fantastic preacher. Pope Gregory XVI was so bowled over by this promising young star of the Catholic Church that the Pope decided to give him a gift of St Valentine’s body. The remains were previously kept in the cemetery of St Hippolytus in Rome. Apparently, it was not unusual to take relics from the catacombs in Rome at the time. 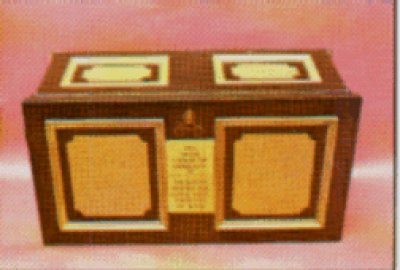 Yep, here is his box!

St Valentine’s remains were transferred to Whitefriar Street Church in 1836. Since that day, people have been visiting the church on St Valentine’s day, offering prayer in all areas of love.

Alas other churches claim to hold the remains of St Valentine. Authenticating these claims is difficult: even with DNA there is no one to connect the genetic material to. It just has to be a matter of faith – unless you have the paperwork. And the Church in Whitefriar Street has just that.

The Whitefriar Street Carmelites published online the following translation of a letter in Latin which accompanied the remains of St Valentine when they arrived in Dublin:

To all and everyone who shall inspect these our present letters, we certify and attest, that for the greater glory of the omnipotent God and veneration of his saints, we have freely given to the Very Reverend Father Spratt, Master of Sacred Theology of the Order of Calced Carmelites of the convent of that Order at Dublin, in Ireland, the blessed body of St Valentine, martyr, which we ourselves by the command of the most Holy Father Pope Gregory XVI on the 27th day of December 1835, have taken out of the cemetery of St Hippolytus in the Tiburtine Way, together with a small vessel tinged with his blood and have deposited them in a wooden case covered with painted paper, well closed, tied with a red silk ribbon and sealed with our seals and we have so delivered and consigned to him, and we have granted unto him power in the Lord, to the end that he may retain to himself, give to others, transmit beyond the city (Rome) and in any church, oratory or chapel, to expose and place the said blessed holy body for the public veneration of the faithful without, however, an Office and Mass, conformably to the decree of the Sacred Congregation of Rites, promulgated on the 11th day of August 1691.In testimony whereof, these letters, testimonial subscribed with our hand, and sealed with our seal, we have directed to be expedited by the undersigned keeper of sacred relics.

The shrine to St Valentine

The church is only a few minutes’ walk from St Stephen’s Green. They have a great little shop that sells keyrings and other stuff with St Valentine’s image on it. And so they should. Because they have the paperwork.

The church likes to be associated with Valentine’s day, saying that it hopes to connect with ‘with young people and their needs as they grow into maturity and adult life’. Apparently, legend has it that if you propose here you are guaranteed a yes. So fellas, bring your girlfriend to the church and propose – you just never know. And if no one loves you, then go there and pray for a hottie.